Both sides had winning chances in this game, played yesterday in the New York May Open, at the Marshall Chess Club.

These games were played by me on Saturday, in the New York May Open, at the Marshall Chess Club.

Round One: English Opening

Besides Washington Square, you can also play chess at Greeley Square in Manhattan.
Posted by James R. West at 5:41 AM

At Contre Gambit Philidor, Frederic Fournier analyzes my game as Black against Kavinayan Sivakumar.
Posted by James R. West at 4:44 AM

Here is an article, in the South Africa edition of Sports Illustrated, on the battle for the FIDE presidency, between Kirsan Ilyumzhinov and Anatoly Karpov.
Posted by James R. West at 4:34 AM

Growing up, I followed the New York Rangers. I had little choice. Back then, there were just six teams in the National Hockey League. The Rangers were the only local team.

In October 1972, two big events occurred. I joined the United States Chess Federation (one month after Fischer took the world championship crown from Spassky), and the expansion Islanders joined the NHL. From day one, there was a special affinity between me and the Islanders. We both started off weakly, gradually improved, and ran into a psychological barrier. For me, I could not achieve a master's rating of 2200. For the Islanders, they could not win the Stanley Cup.

I had an additional problem. To the best of my knowledge, no one from my town had ever become a chess master, although one player nearly made it. When he quit playing chess, his final rating was 2199! He even petitioned the USCF to award him one rating point, so that he could retire as a master. But his request was denied. I started wondering if the same fate awaited me. Time and again, I tried to crack the 2200 barrier, all to no avail.

The next day, with new-found determination, I played in a quad at the Marshall Chess Club. Looking at my opponents' ratings and doing mental arithmetic, I figured that if I won all three games my post-tournament rating would be 2201. But my third round opponent was going to be difficult. His rating was above 2300.

I defeated my first two opponents and was lucky enough to pick the white pawn when choosing colors for the final round. The game began uneventfully, when the incredible happened! My opponent blundered a rook, for nothing. Surely now, I would become a master.

There was one last obstacle to overcome. With 45 minutes on his clock and with ten more moves to make before the first time control at move 40, my opponent went into a deep think for 44 minutes. With a minute left, suddenly he started making moves at a furious pace. Foolishly, I did the same. We rattled off half a dozen moves at lightning speed. I reached to touch a piece for my 37th move and took my hand away at the last second. In that instant, I became a chess master!

My opponent had set a clever trap. If I made the obvious move, it would cost me a rook. The likely outcome would be a draw, and I would still not make master. As soon as I played the correct move, the 2300 player resigned immediately. He told me that, as early as move 31, he had seen the trap at move 37. But he felt that I would never fall into it, unless I played too quickly. Since I had plenty of time on my clock, his only chance was that I would blunder in his time pressure. It nearly worked!
Posted by James R. West at 4:04 AM 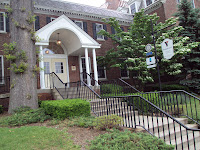 At yesterday's Westfield quads, I drew this game with the PCG.

Yesterday, at the Hamilton quads, I drew a couple of games.

During Sunday's quads in Westfield, I snapped these photos. 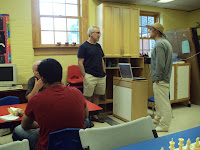 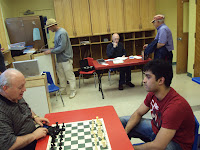 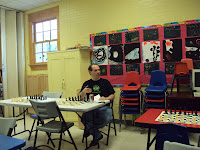 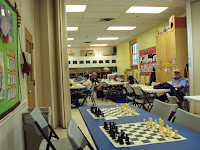 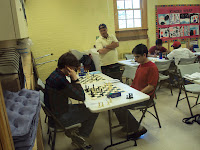 Frederic Fournier provides a link, at Contre Gambit Philidor, to my game as Black against Ed Kopiecki.
Posted by James R. West at 3:46 AM

The grand opening of Chess Mates in Rahway, originally scheduled for March 1st, has been tentatively rescheduled for June 1st.
Posted by James R. West at 4:02 AM 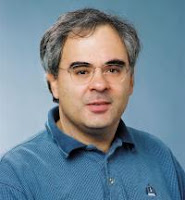 In 1980, at the Westfield YMHA, I played in a quad with two other humans and one computer. It was Belle, winner of the 1980 world computer chess championship. Going into the final round of the quad, Belle and I had two points each. I lost the coin toss and played Black. The game ended in a hard-fought draw, with me being down two pawns but I had doubled rooks on the seventh rank. The computer's programmer Ken Thompson offered the draw, and I accepted.

Today I have difficulty drawing against the Fritz8 software program, which tells you that computer chess has advanced a long way since 1980. Here is an article Can We Solve Chess One Day? that features Ken Thompson and IM Ken Regan.
Posted by James R. West at 4:13 AM

During last night's fundraiser for the Karpov 2010 campaign at the Trump SoHo hotel, GM Magnus Carlsen played a blitz game of chess against IM Dean Ippolito of New Jersey, as seen in this video.
Posted by James R. West at 5:18 AM 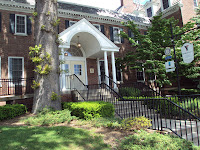 In Sunday's quads at Westfield, I drew this game.

In Saturday's game/60 Swiss tournament, at the Marshall Chess Club, I finished with a score of 3-1-0. 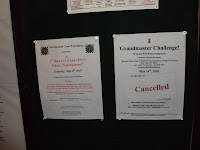 Tomorrow's Grandmaster Challenge tournament, at the Marshall Chess Club, has been cancelled.
Posted by James R. West at 3:46 AM

Alejandro Melchor [pictured above], of Barcelona, discusses a new move in the Latvian Gambit.
Posted by James R. West at 2:35 AM

One way to satisfy your hunger for chess is to use pieces made of chocolate, as seen on the May 4th episode of Little Chocolatiers.

Yesterday, Viswanathan Anand won the twelfth and final game of his world championship match against Veselin Topalov. Anand retains the title, winning the match by one point.
Posted by James R. West at 4:34 AM

On Saturday, May 15th, the South Jersey Open 2010 will be held at the Holiday Inn in Cherry Hill. Here are the pre-registered players.
Posted by James R. West at 4:08 AM