Alan Trefler, co-winner of the World Open 1975 with grandmaster Pal Benko, is now a billionaire.
Posted by James R. West at 5:09 AM

My Review of "Lisa: A Chess Novel"

Midway through perusing Lisa: A Chess Novel [Zugzwang Press, 2013, 231 pages] by grandmaster Jesse Kraai, I suddenly realized that I wasn't reading prose. I was reading free verse poetry, interrupted now and then by dialogue. The book might just have well been titled Igor: A Chess Poem because the late grandmaster Igor Ivanov comes across as a far more interesting character than Lisa Lena Schmied.

I can't recall the exact date, but sometime around the early 1980's I played a game against Igor Ivanov at the Bar Point in New York City. Playing White, I followed Fischer-Korchnoi, Curacao 1962 for the first 28 moves and then varied with the recommended improvement 29.Ra2, which seemed to take Igor by surprise as he spent a great deal of time looking at the position before continuing.

A few moves later, Igor offered a draw which I accepted. My elation at having drawn against such a strong player was short lived. Behind Igor's back, as he exited the room, a player gestured with thumb to mouth and head tilted back that Igor was drunk. The fictional Igor Ivanov in Lisa has mostly recovered from his alcoholism, although he still has a "big drink" occasionally.

The following chess problem plays an important role in Lisa.  See if you can solve it, as the title character is required to do by her coach Igor.

White to play and draw

If you want the solution, you will have to buy the book!
Posted by James R. West at 4:00 AM

From Queens with Lev 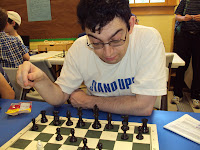 In the film Pawn Sacrifice, the role of Bobby Fischer's mother Regina will be played by Robin Weigert.
Posted by James R. West at 3:22 AM

On Sunday, I finished with a score of 2-1-1 in the tournament at the Marshall Chess Club.

Yesterday I finished with a score of 2-1-1 in the tournament at the Marshall Chess Club.

Magnus Carlsen has lived up to his name!

Please join us this Sunday, November 24th, at 7:30pm for an evening with grandmaster Dr. Jesse Kraai.  GM Kraai who earned a doctorate in philosophy from Heidelberg University took a three year hiatus from tournament chess to write the chess novel Lisa, a book that has been received with stellar reviews.

After the reading, Jesse will analyze key positions of the world championship match between Viswanathan Anand and Magnus Carlsen which is currently being held in Chennai, India.  Last month GM Kraai demonstrated that his understanding of chess was not diminished by the long break when he won the Western States Open.

The event takes place following the Marshall Sunday Game/45 tournament, a four round event in two sections (Open & U1500) starting at noon. Refreshments will be served.

Please refer to this press release for more information about Lisa.

“Two thumbs up. This is the most realistic chess novel ever.” Full review here. - chess writer Dana Mackenzie

The debut novel by chess grandmaster Jesse Kraai tells the story of a 13-year-old California girl who defies her mother and her school to study chess with Russian master Igor Ivanov. Lisa is an exploration of what it means to get an education in chess, and a meditation on what makes the game so compelling to those who play. It is a fantastic story with a cast of characters that will be familiar to anyone who’s ever set foot in a tournament hall.

Lisa is available in ebook and paperback.

“Lisa will give non-chessplayers a glimpse into what living in this bubble is really like.” - grandmaster and chess writer Josh Friedel

About the author:
Jesse Kraai is an American chess grandmaster with a PhD in philosophy from the University of Heidelberg.
e-mail gmkraai@gmail.com
Phone 510-717-6434
Posted by James R. West at 6:40 AM

On Monday evening, I won this game at the Marshall Chess Club.

Grandmaster Magnus Carlsen is featured in this article by Martin Rogers.
Posted by James R. West at 2:35 AM

On Sunday, I finished with a score of 2-1-1 plus a zero point bye, in the tournament at the Marshall Chess Club.

On Saturday, I won this game at the Marshall Chess Club.

From ICC with Lev 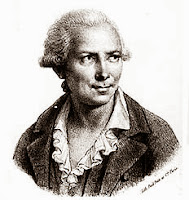 At Contre Gambit Philidor, Frederic Fournier analyzes candidate master Lev Zilbermintz's game as Black against a FIDE master, from the Internet Chess Club.
Posted by James R. West at 4:47 AM 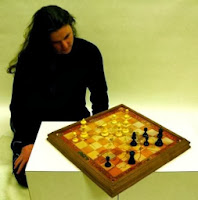 Michael O'Connor [pictured] is the lead singer and songwriter for Mikell's Plot.

The rock band has applied for an invitation to audition for America's Got Talent.


Their music can be heard on Asbury Park Radio.
Posted by James R. West at 5:04 AM

In the film Pawn Sacrifice, Conrad Pla [pictured] has been cast as Carmine Nigro, the first chess teacher of Bobby Fischer.
Posted by James R. West at 5:11 AM 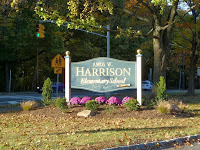 Tomorrow I will start to teach the after school enrichment class on chess, conducted by Enrich and Grow Academy, at Harrison Elementary School in Livingston.
Posted by James R. West at 4:24 AM

On Sunday, I won this game in the tournament at Chess Mates.

Here is the final position.

Please join us for an evening with grandmaster-elect Irina Krush.

Irina Krush, who recently attained the highest title available to male and female chessplayers alike, will discuss her climb to the top, presenting key games and analysis.

Don’t miss the celebration of this historic event!

On Saturday, I drew this game in the quads at Chess Mates.

My Recollection of Jerry Bilbud 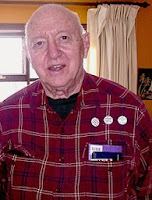 At the 1990 world chess championship in New York City, I got to know the late Jerry Bilbud.

Before the match, I waited in line to apply for journalist's credentials, but they were all gone by the time I arrived. Instead I applied for and received photographer's credentials, not knowing the first thing about photography. At a store, I purchased a film camera, about the size of a pack of cigarettes.

One thing I learned from my experience at the chess match is that, for photographers, camera size matters! It seemed like the bigger the camera, the more arrogant the photographer. Before one game, a photographer with a large camera started talking disrespectfully to me in front of his fellow paparazzi.

I will never forget how Jerry came to my rescue. Holding his camera high for emphasis, Jerry said, "Jim is a national master. I would trade in my camera right now if, for one day, I could be a national master like Jim!"

The words "national master" clearly meant nothing to the paparazzi, but the size of Jerry's camera impressed them enough that they backed down.

The FIDE world chess championship, between Viswanathan Anand and Magnus Carlsen, starts today.
Posted by James R. West at 3:02 AM 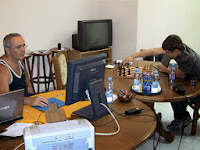 In Business Insider, Garry Kasparov describes Magnus Carlsen as "a type of Harry Potter, a super-talent destined to become one of the greatest."
Posted by James R. West at 4:48 AM

On CNBC, grandmaster Ken Rogoff discusses the upcoming championship match between Viswanathan Anand and Magnus Carlsen.
Posted by James R. West at 4:44 AM

On Tuesday, I finished with a score of 2-1-1 in the tournament at the Marshall Chess Club. 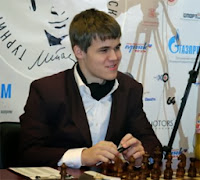 This is .44 Magnus, the most powerful chess player in the world, who would blow your pieces clean off the board.

You've got to ask yourself one question: "Do I feel lucky?"

On Sunday, I finished with a score of 2-0-2 in the tournament at the Marshall Chess Club.