"The Greenbecker Gambit" by Ben Graff

Ben Graff has written a new book.
Posted by James R. West at 8:14 AM

Read the many tributes to Wesley Hellner [pictured].
Posted by James R. West at 6:47 AM

Organizers of Magnus Carlsen's on-line event have put in numerous safeguards.
Posted by James R. West at 5:27 AM

On Sunday, I played this game in the Marshall Chess Club on-line tournament.

The Phung sisters demonstrate the link between golf and chess.
Posted by James R. West at 7:20 AM

On Thursday, I drew this game in the Marshall Chess Club on-line tournament.

Learning how to play chess in the park and not by taking chess lessons, Wesley Hellner [pictured, right] had many wins and draws against higher rated players at the Marshall Chess Club.

Often in between rounds, Wesley accompanied the late Ed Kopiecki and myself for lunch at the bagel store on Sixth Avenue.
Posted by James R. West at 6:29 AM

Kasparov to Play in Nations Cup

Garry Kasparov will be among the players in an on-line chess competition.
Posted by James R. West at 7:04 AM

On Sunday, I played this game in the Marshall Chess Club on-line tournament.

"ArnieChipmunk" sends a link to this Philidor Counter Gambit.
Posted by James R. West at 7:02 AM

The Board of Governors has agreed that, at this time, the Marshall Chess Club will remain closed indefinitely.

Because members have many questions, the club will hold a town hall meeting on Wednesday April 22nd at 7pm.

The meeting will be conducted via Zoom.

After remarks from the Board of Governors, they will host a question and answer period.

The meeting will conclude with a chess lecture by club member - and twice Canadian chess champion - grandmaster Pascal Charbonneau.

Register in advance for this meeting at
https://columbiauniversity.zoom.us/meeting/register/tJYldOmvrD0sGNdAxO5uMBHDSolVNF7qoa4b.

If you have questions for the Board of Governors to answer, e-mail them to bryanq@marshallchessclub.org.
Posted by James R. West at 8:06 AM

On Thursday, I drew this game in the Marshall Chess Club on-line tournament. 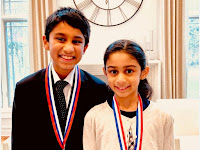 The on-line chess tournament will benefit the Summit Medical Group.
Posted by James R. West at 6:48 AM

Book Review of "Chess and the Law" 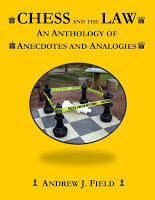 Book Review: 'Chess and the Law: An Anthology of Anecdotes and Analogies'

Andrew J. Field's book about the intersection of chess and American law is a treat for chess fans and members of the legal set.

When I was young I spent many weekends at the Dallas Chess Club testing my mettle against all sorts of people at the club, and later by participating in chess tournaments across the state. Back then, before the Internet, on any night the club was open you could encounter people from all sorts of backgrounds and professions. For instance, I met students, grocery clerks, cabbies, truck drivers, printers, professional gamblers, newspaper columnists, plumbers, computer programmers, college economics professors, members of the Dallas Symphony Orchestra, engineers, doctors, diamond brokers, psychologists, many lawyers and even a judge or two.

For some reason, this devilishly simple game that takes 30 minutes to learn and a lifetime to master is irresistible to members of the legal set. Andrew J. Field, another chess-playing lawyer, and the author of a great new book, “Chess and the Law: An Anthology of Anecdotes and Analogies,” published in 2019, has a theory about why the Royal Game has so much appeal for people trained in the law.

“I think attorneys and judges are naturally drawn to the game of chess because the contest resembles litigation and the outcome is dictated by the rules,” Field said.

“Chess and the Law” covers the intersection of both subjects in numerous anecdotes and examples, such as the two former world chess champions, Paul Morphy (recognized as world chess champion before the title was designated by a governing body) and Alexander Alekhine (the fourth FIDE World Chess Champion), who were both trained as lawyers!

Before Field became an author (his first book is, “Mainliner Denver: The Bombing of Flight 629,” (published in 2005), he earned his J.D. from Vermont Law School, where he graduated Magna Cum Laude, 1989, was a law clerk at the United States Court of Appeals for the Tenth Circuit (1989-90); served as the deputy district attorney for Arapahoe County, Colorado (1991-94); was a law clerk for the Idaho Supreme Court (1994-95); was a staff attorney (criminal law specialist) for the Colorado Court of Appeals (1995-2011); was a staff attorney and reporter for the Model Criminal Jury Instructions Committee, Colorado Supreme Court (2011-15). He has also been admitted to practice in Colorado (inactive status) and Massachusetts (retired status).

In his 279-page, “Chess and the Law,” Field eschews writing about the rules of chess. Nor does his book contain any diagrams, strategies or suggestions about how to get better at the game. However, he does present many fascinating and sometimes amusing anecdotes about the history of American law’s meetings with chess. The book is loaded with interesting stories involving U.S. presidents, Supreme Court justices, appellate practice, criminals, evidence, confessions and sentencing … all involving chess!

“My favorite anecdote in the book is the story of William Russ and Frances Dayton,” Field said.

I know quite a bit about the history of the game and its most celebrated players and tournaments, but was unfamiliar with this shocking and strange tale from 19th century America that Field recommended. It’s a crazy story about chess problems (a specialized area of chess study), bibliomania, an unpublished chess opus, unrequited love, attempted murder and a failed suicide attempt … all the elements necessary for a great Lifetime movie!

There are many other interesting stories in Field’s book. Some of my favorites were the ones where prisoners confessed their guilt to their chess partners while playing the game, and wound up with longer or more severe sentences as a result!

Besides the interesting but unlikely subject matter, I also like how Field’s book is the organized — there are just four types of entries:

* Accounts of chess-related crimes, lawsuits and agency actions.
* Anecdotes about attorney- and judge-players of note.
* Comments on law journal articles that use chess as an analogy.
* Chess-themed quotes and quips from judicial opinions.

The other thing I like about the book is that most of the entries are short, so you can put it down mid-page and not miss a beat the next time you pick it up again, which makes it a perfect nightstand reader.

Field says that when he began researching the book, it wasn’t to be a serious endeavor.

“At the outset, I was uncertain whether there really were many connections between chess and the law and undertook my research purely for self-amusement,” Field said. “But as my research began to get deeper I discovered that there was an overwhelming amount of information, and that winnowing down the selections might actually be the harder task.”

Just like the law, there is a vast literature for chess: newspaper accounts, magazines devoted to chess, and tens of thousands of books on the Royal Game. In order to write his book, Field says he used all of these sources and many others.

“I used a variety of research tools including online electronic legal databases, Google PDF scans of books from the 1800s, telephonic interviews and a wide survey of contemporary chess literature for starting points to rabbit holes I could crawl into for more material,” Field said.

“Chess and the Law” is a welcome addition to the existent literature of both subjects and a treat for chess fans and members of the legal set. I highly recommend it!
Posted by James R. West at 5:54 AM

On Sunday, this game was played in the Marshall Chess Club on-line tournament.

Because it was a team match, Black took the draw although winning in the endgame.
Posted by James R. West at 7:46 AM

On Thursday, I played this game in the Marshall Chess Club on-line tournament.

The chess pieces nest within one another, like a Russian Matryoshka doll.
Posted by James R. West at 6:15 AM 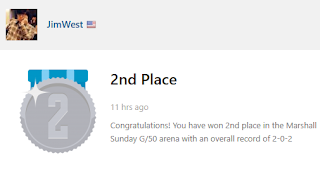 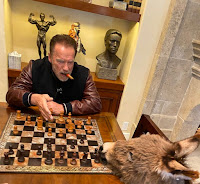 While in self-isolation, Arnold Schwarzenegger plays chess against a donkey.
Posted by James R. West at 7:47 AM