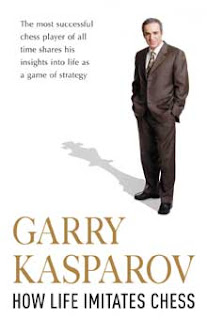 Before reading How Life Imitates Chess [Bloomsbury, 2007, 224 pages], I was skeptical about Garry Kasparov's basic premise that life imitates chess. For me, the chessboard has always been a parallel universe, separate and apart from the real world. I was somewhat reassured when, in the preface, Garry answered this question "So, Mr. Kasparov, how does life imitate chess?" by saying, "It doesn't!" As the author further explains, his book is not about how learning chess can make you better at making decisions but "about the tools chess gave me to analyze and improve my thinking and my decisions in all situations."

Kasparov's book might have just as easily been titled How Chess Imitates Life or, as Yogi Berra might have called it, How Life Imitates Chess and Vice Versa. In an ingenious way, Garry gives example after example from real life where decisions were made that bear a striking resemblance to those made by chessplayers during a game. Or is it the other way around?

Some of these examples include those made by Winston Churchill, Emanuel Lasker, John Kerry, and the French cavalry at the Battle of Agincourt. George Washington and Ulysses Grant are also mentioned briefly.

But, for us chessplayers, the really interesting parts of the book occur when one of the all-time great world champions reveals what was going through his mind when he played against the likes of Anatoly Karpov and Tigran Petrosian. How did Garry respond to adversity when he lost three straight games to Karpov? How did Garry finally defeat Petrosian after losing his first two games against the Armenian? As an occasional chess teacher, I tell my students that how you handle defeat will determine how successful, or unsuccessful, you will be as a chessplayer. So it was instructive to me when Kasparov described how he had handled it.

In fact, all chess teachers might do well to have their students read this book. It explains how chess is a mixture of art and science, and the difference between tactics and strategy, in understandable ways. One word of caution: if you can't find this book in the chess section at your favorite bookstore, try looking in the business and investing area, which is where I found it. The reason for this is because, in addition to being a learning tool for chessplayers, Kasparov's book can also help those of you who are trying to get ahead in the business world. Kasparov cites bad business decisions made by Pan Am and AltaVista, as well as farsighted ones made by General Electric and Boeing.

A great deal of the book's easy readability is due to the fact that its English translation was done by Mig Greengard, who writes a popular blog by name of The Daily Dirt Chess Blog. Greengard's informal and casual style of writing prevents How Life Imitates Chess from becoming stodgy and boring. The chapters are the right length, neither too long nor short. They might make for good homework assignments, one a week, for your chess students.
Posted by James R. West at 5:57 AM